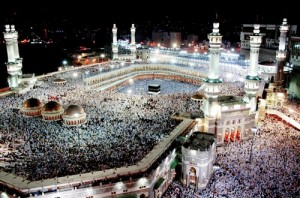 A sea of pilgrims descends upon the most sacred city of Islam every year. All the men and women are dressed in ihram and male wear pieces of white cloth.

“Hajj is a an occasion that shows we are one nation and gathered by peaceful religion Islam . Dr. Bilal Philips who is the founder of the Qatar Islamic Online University said:

It provides us with the entire a universalist view of mankind.

Hajj which is attended by millions of pilgrims every year and Hajj the 5th and final pillar of Islam. It takes place in the month of Zill Hijjah which is the last month in the Islamic calendar.The pilgrimage is obligatory for all the Muslims to perfrom once in their lifetime who is capable to do so. Hence there are 2 conditions which are applicable to all the muslims who desire to go saudia for perfoming Umrah and Hajj.  The initial thing is that you should be physically able and the second is that you should be financially capable to do it. During the Hajj all the Muslims who make the sacred journey are required to spend 5 days in the desert surrounding the Holy city of Makkah. They travel between those specified points in order to perform rites laid down in Islam’s book, the Holy Quran.

These rites remember and honour the life of Hazrat Ibrahim (AS) who built most revered structure of Islam, the Holy Kaaba, with His son Hazrat Ismail (AS), said by Mohammad Alkobaisi, the grand mufti in Dubai Ministry of Islamic Affairs and also presentor of  Dubai One TV show that is about Understanding Islam.The special importance is the story commemorated by the celebration of Eid ul Azha which marks the end of pilgrimage Hajj.

It is a Muslims believe that Hazrat (AS) was ordered by ALLAH Almighty to sacrifice His son and the Hazrat Ibrahim (AS) was about to do so. ALLAH Almighty stopped him and sent an animal to be slaughtered (qurban) instead of Hazrat Ismaeel (AS).

Hazrat Ibrahim (AS) was dedicated in his relationship with ALLAH Almighty as was His son Hazrat Ismaeel (AS) and they were willing to make the greatest sacrifice.

On the other hand, nowadays we have become very comfortable, easy and unwilling to even slight inconvenience ourselves for the sake of our relationship with ALLAH Almighty and in the struggle for spirituality that is why performing Hajj is so significant in Islam.

That is why it is important because it teaches a person peace and patience. It also gives a person the change to be absolved of his sins and to again restart peaceful life.

If, Hajj is performed accurately, is like a shower that it washes the dirt off.

Imagine you are a mobile phone and your battery of piousness and belief is slowing, Hajj jumpstarts your battery recharge. It is also opportunity to go back out into the globe and refreshed yourself and continue strengthening and power your faith.

Hajj also reminds you to be kind with mankind that is why we sacrifice an animal during Hajj and referring to the obligatory slaughter of a goat or sheep or cow on the 10th of Zil Hajj.

Then the meat should be distributed among the poor and needy, this sense of solidarity and humanity with all sections of society i.e mankind, is a crucial taching and lesson of the pilgrimage which we perform.

Cheapumrahpackages.info is one of the authorized Hajj and Umrah travel agent based in UK offers a range of Cheap and Standard Hajj Packages 2016 from UK.