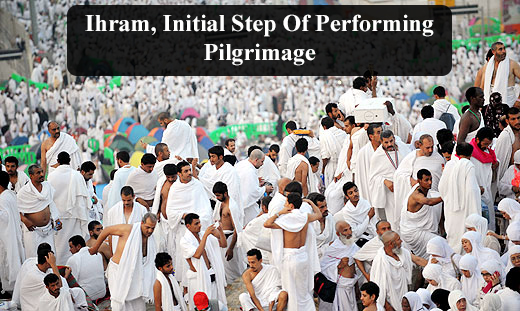 After you have decided to go for Umrah or Hajj and made all the necessary preparations. Paid all your debts, repented, absolve for any wrongdoing and bad behaviours toward others, etc. Now you are ready to take the first step in the blessed journey: ihram.

Ihram consists of two pieces of cloth that is worn by male pilgrims. And for females it’s their casual dress but it should be loose so their body part cant shows. The starting act of performing Hajj or `Umrah by making the niyyat, now a person is ready to start their Hajj or `Umrah after proclaiming and saying the Talbiyah. The state of purification is necessary in which the pilgrims are during Umrah or Hajj. After putting on ihram and making the intention (niyyat) of ihram, the pilgrims enter in the sacred state of ihram, which requires them to avoid and stay away from particular prohibited things.

Cleanliness and purity is highly recommended before wearing and getting into the sacred state of Ihram. It is also recommended that pilgrim should clip finger and their toe nails, completely shave off their armpit and also clean pubic hair, comb the beard and hair, trim the moustache, take a ritual bath (perform ghusl). After wearing avoid using fragrance like perfume etc.

For men, the ihram garments comprises of two sheets. One is wrapped around the upper part of the whole body except the head. The other is wrapped around the lower portion of body. You can fix this sheet by using a belt, a money belt, or a pin etc. Male pilgrims should avoid wearing stitched clothes.

For women, the ihram is just their ordinary loose fitting clothes that cover their body except the face and hands. In some countries Ihram is traditionally special clothes, such as white coloured dresses or black cloaks, but this is not required.

Putting on ihram garments is the first and the most important step in performing Hajj and `Umrah. As mentioned throughout this article, pilgrim should have to put on ihram and then they have to make the intention of starting Hajj or Umrah. Pilgrim can put on ihram from your home or at meeqat but you cant cross the station of meeqat without wearing Ihram, after Ihram pilgrim intend to start Hajj or Umrah.

Pilgrims in the sacred state of ihram are allowed to use soaps and shampoos that are completely unscented. According to obligatory precaution, pilgrim should refrain from smoking. A person should avoid all the prohibited things so there will be not any kind of doubt left in the acceptance of Hajj or Umrah.

Whether it is a Hajj tour, Umrah that you’re looking for, Cheapumrahpackages.info is committed to providing you Cheapest Umrah Packages and Deals with the best quality of service to make your sacred journey memorable.

MAY ALLAH ALMIGHTY ACCEPTS YOUR HAJJ AND UMRAH AND FORGIVES ALL OF YOUR SINS AMEEN.